Forest Green Rovers are having a great season. Currently sitting second in the Sky Bet League Two only one point behind the leaders with three games in hand. The history of the club is rich. They formed way back in 1889 and although they have achieved limited success on a national scale, they did win the FA Vase in 1982 and also reached the FA Trophy final in 1999 and 2001. Let’s face it though we are not here for football chat.

In a collaboration with PlayerLayer and local coffee roasters Rave Coffee, Forest Green Rovers, based in the Gloucestershire town of Nailsworth, has this week announced the release of their latest kit made from waste coffee grounds and recycled plastic.

“It’s time the world of football wakes up and smells the coffee about the future of the planet. If nothing else, this prototype kit will bring new flavour to that old cliché of grinding out a result.”  Dale Vince, Chairman, Forest Green Rovers

The club has been transformed since 2010 when Dale Vince, the green energy industrialist and owner of the electricity company Ecotricity, invested in the club and became a major shareholder. Three months later he was appointed Club Chairman. In 2017 the club became the world’s first United Nations certified climate-neutral football club powered by renewable energy. It claims to be the first vegan football club in the world after receiving the vegan trademark from the Vegan Society. The team plays on an organic pitch, which is cut by a futuristic solar-powered robot lawnmower, and all rainwater that falls on the stands or on the pitch is collected and recycled to minimise the club’s use of mains water. Forest Green goes above and beyond with electric car charging facilities at the stadium, to encourage fans to travel to games sustainably.

They have been working closely with their kit sponsors Playerlayer to develop sustainable football kit fabrics for some time now, having released a bamboo kit 2 years ago.

“We believe that along with music and art, sport has the power to shape our culture and to drive change. As well as the environmental benefits, there are big performance benefits to using this new fabric. We love to push the boundaries with FGR!” Rod Bradley, Co-Founder, PlayerLayer

The waste coffee shirts will be available to buy next season but are being tested on Saturday 27th February 2021 when they face Colchester United in their League Two clash at their home ground The New Lawn Stadium. The club will sell the match-worn limited-edition prototypes along with a very special coffee blend from Rave Coffee.  Proceeds will be split between Gloucestershire NHS and One Tree Planted.

Football has also seen other clubs like Manchester United, Liverpool, and Real Madrid release sustainable football shirts made from recycled polyester fabric. Currently in the English Premier League Arsenal has been named as the leading football club in the sustainability table released by Sport Positive in 2019. They looked at elements such as clean energy, waste management, water efficiency, single-use plastic reduction, sustainable transport, and plant-based or low carbon food. Sign up on their website to find out more about Sport Positives 2021 summit where they will be bringing together global sports and environment stakeholders to support the advance towards more sustainable sports operations. Let’s hope that Forest Green Rovers get a special shout-out and awarded for their hard work and sustainability initiatives.

If you liked this article on waste coffee fabrics and want to find out more about sustainable textiles and innovations in eco-fabric check out Marjo’s piece on Sustainable Fibers.

Jon Mitchellhttp://www.jmitchelldesign.co.uk
Originally from Brighton, UK. Jon graduated with a BA (Hons) Menswear Fashion Design Degree. He's worked as a Senior Sportswear Designer for Puma, Football Kit Designer at Umbro, Streetwear designer at Bench, Technical Outdoorwear Designer at Regatta Outdoors, and Denim designer at Next. Freelance clients in his portfolio include Adidas, Ellesse, Timberland and Ecko Unltd. Now residing in the beautiful village of Marsden, in the West Yorkshire countryside. Jon set up J Mitchell Design in 2017 which quickly gained a reputation as one of the UK's leading fashion design studios winning the award for Best Men's Fashion Design Studio UK 2019. JMitchellDesign has helped create and launch multi-product fashion start-up brands across sportswear, activewear, equestrian, lifestyle, and performance sectors. Along with his team of sustainable sourcing experts, Jon is working on sustainable projects to help change the destructive nature of the fashion industry. Visit his website www.jmitchelldesign.co.uk or email him at jon@jmitchelldesign.co.uk to find out more.
Next articleSustainable Angle’s Future Fabrics Expo 9½ 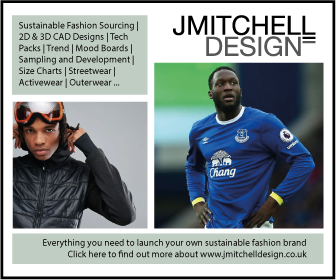 Sustainable fashion law has not kept up with the speed of change to provide consumers with proper protection. Slow, sustainable, fair, ecological, ethical, local, environmentally...

Raeburn scooped the award for the brand of the year at Draper's Sustainable Fashion 2021 Awards. "Raeburn has constantly been innovating, collaborating and trying to...